For those of you who have been running custom ROM's, like this one, on your Samsung Galaxy Player 5.0 for a long time, you may have forgotten about a small piece of unusual hardware on this device. Although, the YP-G70 is not a phone it does have an earpiece in the top center of the front of the device and it is functional. I have never heard of another Android device that has an earpiece and is not a phone. It's odd but it does make sense. I don't know any of this for certain but it seem to me that Samsung was trying to come up with a competitor to the ipod and they were already making phones so it seemed like they just took a phone design and modified it into to Galaxy Player 5.0. 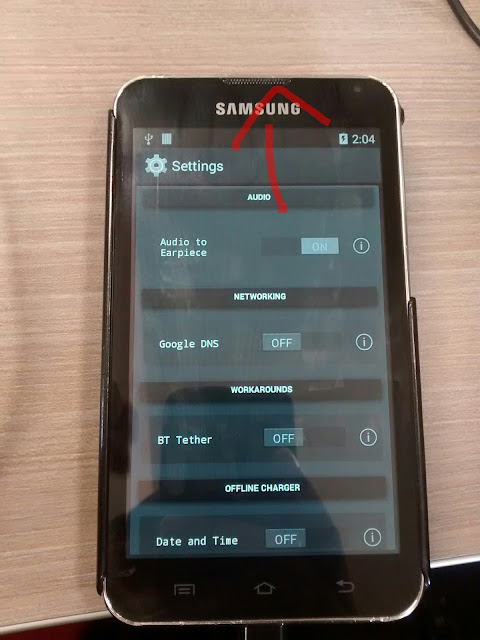 We have been building Android for this device as a small tablet. I guess that makes sense, after all, if we had built it as a phone, there would be lots of useless phone software on the device ( like the Phone.apk ) but doing it that way renders the earpiece useless. I'm not sure how useful the earpiece can actually be on a device like this but, I feel like if it's there we should be able to use it. So, I build in a switch in "Extras" so that you can route audio that would normally go to the speakers on the back, to the earpiece. If anyone has any idea's about how to make this piece of hardware more useful. Let me know.

When I first calibrated the compass for the LP sensor lib it seemed to be working perfectly but I have recently replaced the LCD Screen on my YP-G70. After that, compass was misaligned. It was puzzling and now I have no idea if the compass is aligned properly. All I can say is that it is aligned properly for me.